How have you been?

Hello, everyone. How’s it going? Today we have a new episode of the inglesonline podcast. To download or just listen to other episodes and download transcripts, go to inglesonline.com.br and click Podcast Inglesonline.

So, today’s podcast is about stuff that is usually considered very basic. You know, you’ve seen this on Lesson 3 of your Basic English book and… check! Done, and you’ll never talk about it again.

You know how it works, though: it can take some time until we internalize stuff we’re being exposed to, and the more we’re exposed to that stuff, the faster we’ll acquire it. That means, the faster we will internalize it. Students may have seen or heard about the basic stuff while attending English school, and that doesn’t mean they’re actually using that stuff correctly when they speak or write.

So this is my goal today: talk about three little mistakes I’ve seen, or rather, heard, people make, kinda often, lately. They are all what I would consider details, so English learners tend not to pay as much attention to them as they do the big stuff. You know, verbs, nouns and other big words.

OK, moving along to mistake #2… I read this the other day: … something. Again, we say it just like that in Portuguese, right? Sou fã disso, sou fã daquilo. Not exactly so in English. In English, we say I’m a fan. I’m a fan of soccer, I’m a fan of comedies, I’m always a fan of restaurants with good service, I’m a big fan of Indian movies… He’s a fan of homemade ice cream, she’s a fan of sitcoms, he’s a big fan of soapoperas… Imagine that you show up to the opening of a new Greek restaurant in your town. Your neighbor sees you and he’s all surprised! He says “Wow, I didn’t expect to see you here! I didn’t know you were into Greek food.” And you say “Oh, yeah. I’m a fan. I’m a big fan.”

And, last but not least, here’s the third mistake I’ve seen recently. You know how in Portuguese we say Eu não gosto de laranja. Eu gosto de maçã. Não aguento mais político. Detesto peça de teatro mas adoro filme. Well, in English we do not say (unless we’re talking about the color orange). We would say I don’t like orangeS. And we don’t say . We say “I like movieS”. For all the stuff we can count, we use the plural. We can count oranges, apples, pens, movies, as in three oranges, four apples, five pens, two movies and so on. So in order to talk about them as a category, so to speak, we use the plural. 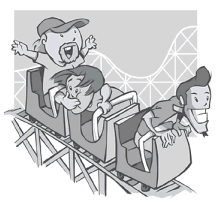 street! I don’t like antS, I love beetleS, I don’t like monkeyS but I love lionS. I don’t like sitcomS but I really like foreign movieS. Here are more examples of when we use the plural form when speaking about things we can count, as a category:

Notice how we would say these sentences in Portuguese: Falando de filme… Panqueca é uma escolha boa… Queria que tivesse mais toalha.Now, again in English: Speaking of movieS… Have you seen anything good recently? PancakeS are a good choice for the company breakfast. Everybody loves them! Merry-go-roundS are cool, but nothing beats rollercoasterS. I wish there were more towelS in this room.

So keep an eye out for the plural form from here on out. And why not come up with your own examples in the comment area?  Talk to you next time!

from here on out = daqui por diante