Podcast: Moving with a van

Hi, what’s up? You’re listening to the new episode of the Inglês Online podcast. Thank you for telling everyone you know about this podcast and, enjoy!

So, if you’ve been listening to this podcast for any length of time you may know that, about four and a half years ago, I moved to London in the United Kingdom. I have since moved house a couple of times and today I would like to tell you a little bit about my experiences and hopefully offer a bit of relevant vocabulary.

So when I first arrived in this country I had only two suitcases with all my stuff in them. Yes, only two very large suitcases. I left some things behind in Brazil but I managed to bring mostly everything with me.. So that wasn’t too complicated. 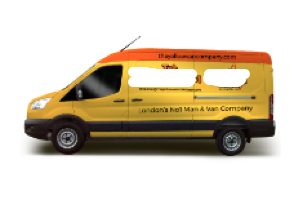 Now… we start accumulating stuff after we’ve settled somewhere, don’t we? I do, anyway. So. Fast-forward to two years later, when I moved house the first time. I had to hire a van. Now, mind you, it’s not like I filled up the van. No, there was still plenty of space in the van after the driver loaded all my stuff into it, but I definitely needed help because in addition to my original pair of suitcases I now had a couple of bags and two or three boxes.

Thank goodness such services are available! You can hire them off the internet – there are plenty of choices. So I picked a van service that seemed pretty reliable and was not disappointed. The driver was a Hungarian guy, very strong, obviously – ’cause his job is to carry boxes and furniture… I rode along with him in the van to my new place and while we chatted he told me that he had been in London for many years and there were many other Hungarians living in the UK, working and saving up money. OK, no surprises there.

So a couple of years later I moved house again, and I hired the same van service to help with the move. This time around the dad of the owner of the company was the driver. Yep – he didn’t say that right away, but as we chatted and he told me about how he was born in the north of England but then he moved to Birmingham, where he’s lived for a while… Then he told me he worked as a builder, in construction, and he currently buys houses, fixes them up and then sells them.. it eventually came up that his son dropped out of college and started the van company on his own, and he’s doing pretty well. So when his dad comes around to London to visit, he pitches in as a driver.

So it was pretty nice chatting with him as I recognised a bit of a Northern accent (he then confirmed to me he was from the North of England) but then I told him it didn’t sound like pure Northern (which was when he told me he’d been living in Birmingham for many years, which had changed his accent a bit). Birmingham is in the West Midlands of England. It’s good to see I can sort of tell a few of the local accents apart, since back in 2013, when I first moved here, I could barely understand some of them!

Why don’t YOU tell me what it was like last time you moved house? Did you have to hire someone to help? Did your friends or family give you a hand? Talk to you next time.

ride along with someone = ir com a pessoa em algum veículo