Podcast: This is off-putting – Inglês Online

Podcast: This is off-putting

How are you? You’re listening to the new episode of the Inglês Online podcast. Download the Inglês Online app at the Google Play Store or the Apple Store – search for “inglês online Ana”. Thank you for telling everyone you know about this podcast and, enjoy!

OK. So, I love our first idiom of today. I love that I’m talking about it on this podcast because, you’ll see, it’s not a difficult expression to understand and it’s not hard to say or pronounce at all! However, it’s not really an idiom that lots of students learn – I don’t see it really being taught even to intermediate students… Maybe even advanced students! So, let’s get started.

Our first idiom is off-putting. When you say that something is off-putting, what you’re communicating is something like “This thing here makes me dislike that thing; it makes me want to go away or not get involved with it.”

An easy example: your friend offers you a beautiful sandwich, and you’re so hungry. The sandwich’s got everything you like: two slices of crunchy bread, a bit of lettuce and tomato, some mayo, melted cheese and let’s say, salami… It looks so yummy to you. Gorgeous! Then, your friend says: “You know what the best thing about this sandwich is? There’s a layer of mussels between the salami and the cheese. Yum!” 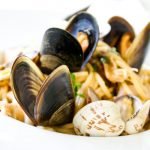 Now, I don’t know if you know what mussels are – they’re a kind of seafood. And granted, lots of people love oysters and mussels, and all kinds of seafood and that’s all fine; other people however can’t stand the idea of it. And for the sake of this little story, you are now one of them.

(By the way: to see a picture of what mussels look like, have a look at the episode over at the Inglês Online website.)

OK, on with the story: so you hate mussels. And you were really looking forward to eating that sandwich. Now your friend has told you that there are mussels mixed in with the cheese and… that is just so off-putting to you! Knowing that there’s a bunch of mussels in the middle of that yummy-looking sandwich is seriously off-putting. Quite simply, you don’t want to eat that sandwich anymore. You’re looking at it differently now. It’s not the same sandwich. That beautiful image of the sandwich that was making you salivate has now been shattered, just like a glass window being hit by a million rocks. OK, I think you get the idea.

If this has been hard for you to imagine because you’re someone who loves mussels, just picture a food that you really dislike and imagine that someone stuffed that thing in the middle of your favourite sandwich or something. Let’s pick a different food… Say, tomatoes. Some people can’t stand tomatoes – I’ve met a few of them in my life.

Sometimes a dish doesn’t look very good. It may taste delicious, but its appearance is off-putting and it makes you not want to eat it. The appearance puts you off eating that food.

Smell is something that can frequently put people off doing something. So here’s my question for you: what is the one ingredient that puts you off eating a dish, if that ingredient is present? Tell me! See you soon.

for the sake of this story = para o propósito dessa história