Hey, everybody! What’s up? This is Ana Luiza, with a new episode of the inglesonline podcast. To download or just listen to other episodes and download transcripts, go to inglesonline.com.br and click Podcast Inglesonline.

OK, so let’s get this episode started with a little story. Let’s say you’ve teamed up with one of your classmates to work on a school project. Let’s say her name is Anna. So you two scheduled your first meeting, but Anna didn’t show up. No warning, no phone call to let you know what happened. She simply doesn’t show up at the appointed time. You give her a call, her mom tells you she’s not home. So next day you ask her what happened, and she says something about being busy… she’s kinda mumbling it so you can’t really understand it, and then the teacher arrives and you have to go back to your seat. So, in the end, you have no idea why she stood you up. 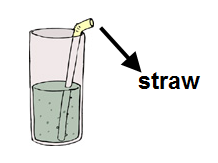 Look at the picture – you can see what a straw is. There’s a reason for this expression, but I’m not gonna get into it right now. So, listen again: when Anna told you that she couldn’t meet with you because she had to plan a party, that was the last straw. You had been patient up to that point, but that was just too much! That was the last straw. You went to see your teacher immediately and you told her you wanted a different teammate.

Different story: maybe you bought a new computer, thinking it would work perfectly, and then you realize quickly that it came with a limited version of the operating system and you’ll have to pay for an upgrade to have the full version. A few days later you realize that one of the USB ports doesn’t work. You’re annoyed, but you’re still hanging on to the computer since the number one reason you bought it is that it has a very good built-in DVD player. You love watching movies and videos, and you wanna be able to do that on your computer. So as long as it plays your DVDs well, you will let minor things slide. Sure, you’re annoyed that you had to pay for the full version of the operational system and you’re also annoyed that one of the USB ports won’t work, but you’ll let those things slide since you’re pretty happy with the quality of the video.

Then, the unthinkable happens: it’s Saturday afternoon and you’re ready to kick back and relax while watching one of your favorite comedies on DVD. You grab a bag of Cheetos, relax into a comfortable chair and and then you pop the disc into the computer. Almost twenty seconds go by and nothing: the computer can’t even recognize the disc. You remove the disc, pop it back in and nothing. You call the Customer Service phone number and you spend 30 minutes on the phone trying to make it work, and nothing. Then you look at your watch and you realize it’s almost 8 o’clock and you’re late for a date. You think “Now the video won’t work? That’s it. That’s the last straw. I’m done with this computer”. So that is the last straw. First you paid for the OS, then you found a non-working USB port, and now the computer won’t play your DVD’s? That’s the last straw.

So, tell us about a situation where you were dissatisfied with something and your dissatisfaction kept growing until something happened and you thought” That’s it! That’s the last straw” and then you left, or you canceled your purchase, or you returned a product, or you left your job… whatever! Let us know in the comments and talk to you next time!

not pulling your weight = não está fazendo a sua parte

I’m not gonna get into it = não vou entrar nisso, falar disso

the OS = the operational system