Hello, everyone. What’s up?

Hello, all. Today we have a new episode of the inglesonline podcast. To download or just listen to other episodes and download transcripts, go to inglesonline.com.br and click Podcast Inglesonline.

Everyone, let’s practice something a little different today. When we’re learning a new language, we start with the easy stuff, and that’s how it should be. After a while we become curious about how the language is really spoken, and we start paying attention to native speakers and their movies, TV shows, radio programs and so on. And then we notice that they don’t always speak in simple phrases – the ones we learned in… at the beginning of our English course. Here are a few examples of what I mean by this – here are a few short sentences. Notice how simple they are:

Short and simple, right? Here they are again, said a bit faster: I saw a dog in the yard. The crowd was noisy. That woman is from Germany. People say Mr. Jones is a great teacher. Did you see those people? So there’s absolutely nothing wrong with them, and as you and I both know, what people say is frequently longer and more detailed. So how about we take a look at one of the ways we can pack more information into those sentences? 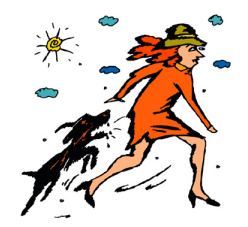 What about the second one?  The crowd was noisy. What crowd am I talking about? Well, I was driving by a theater last night and got stuck in a bit of a jam. It was right at that moment that the crowd inside the theater was coming out to the street, and they were really noisy. They were talking and laughing and I thought they were really noisy. So what I’m telling you is that “The crowd was noisy”. Which crowd? The crowd coming out of the theater. So what I would probably say is The crowd coming out of the theater was noisy.

It’s all about being more specific and providing more detail to what we’re communicating. Let me tell you a few things about my morning. The girl sitting next to me talked on her mobile for hours. The guy serving coffee was wearing a baseball cap. People walking in the street looked rushed. The guy working in his computer kept silent. The woman wearing a black suit didn’t have anything to drink.

So what can you tell us about your morning? Let us know in the comments. Talk to you next time.

so to speak = por assim dizer