Hi, how’s it going? Today we have a new episode of the inglesonline podcast. To download or just listen to other episodes and download transcripts, go to inglesonline.com.br and click Podcast Inglesonline.

“It cracked me up” is a very common thing to say. You know that person, that friend you got… and whenever you’re around him or her you always end up laughing your head off? So that friend is someone who cracks you up. Listen again: he or she cracks you up. Why? Because your friend is really funny, and whenever you’re around them, they crack you up. Some jokes crack me up every time I hear them. Seriously, some things are so funny that no matter how many times you watch them, or hear them, you still laugh your head off. Chandler, a character from Friends, cracks me up. I’ve watched every Friends episode multiple times, but it doesn’t matter… Chandler cracks me up every time. 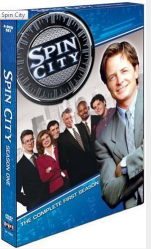 OK, on to the sitcom I was watching. It was an episode of Spin City, which started airing in 1996 and went on for six seasons. This is what the character said that cracked me up: “I’m not the club kinda guy. If I wanna shout in someone’s ear I’ll go visit my grandma”. So if you got what he said, great. If you didn’t get what he said, let’s break it down.

Alright, so after the character says he’s not into clubs, he says “If I wanna shout in someone’s ear I’ll go visit my grandma”. Ok, so anyone who has ever been to a nightclub can relate, right? You don’t really talk to other people when you’re in a nightclub, you have to shout and then that person will shout back to you. Actually carrying a conversation in a nightclub can be really annoying, so… if you enjoy going to clubs I’ll bet you’ve got some reason other than talking. Maybe you enjoy dancing, flirting, but you certainly wouldn’t go to a nightclub to have a long conversation with someone.

So there you have it – when the character said that, I could relate. I knew immediately what he was talking about, and that is why it cracked me up. By the way – that’s what “I can relate” means. I know exactly what you’re talking about, I get it, I’ve been there, I’ve had the same experience and I understand what you’re saying. I can relate. That’s how I felt when I heard him say that – I could relate. So I thought it was funny when he said that if he wanted to shout in someone’s ears, he would go visit his grandma. Why did he say that? Because his grandma is old and she probably can’t hear very well, so he has to shout to her, rather than talk to her.

So what are your examples? Who cracks you up? Can you relate to what this character said? Let us know in the comments and talk to you next time.