How are you? You’re listening to the new episode of the Inglês Online podcast. Thank you for telling everyone you know about this podcast and, enjoy!

So let’s get right into today’s expression, or idiom: imagine you’ve been consuming a certain product for years. Same brand, same product for, say… a couple of years. Not just you, by the way. Let’s say you and your friend Jenny buy the same product. And, let’s say we’re talking about a… limescale remover. Yeah, I’ll take the opportunity here to talk a little bit about what a limescale remover is, ’cause… I don’t think you’re going to learn this at your English course. 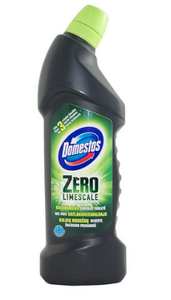 First of all: limescale is that sort of white deposit that builds up over time especially on shower doors that are… made of glass. The last place I lived in Brazil had a glass door near the shower – so if you have the same I’m sure you know what I’m talking about. If you don’t, trust me – limescale is one less problem for you to deal with.

So in case you can’t find limescale removers in your local supermarket, I’ll just go ahead and share with you some useful information that I found… Lemon juice and vinegar will apparently do the trick if you’d like to remove limescale from the glass doors.

Now, here where I live I can find a couple of different brands of limescale removers in the cleaning products section of my local supermarkets. So let’s go back to my little story from the beginning of the episode, where you and your friend Jenny have been using the same limescale remover for a couple of years.

Jenny recommended this product to you two years ago, and you started using it. And then, what happened yesterday was that you bumped into Jenny when you were both at the bank – she had just paid some bills, while you were just about to go in and get some cash. And.. somehow, you guys got to talking about house-cleaning and limescale just came up.

you got to talking = vocês começaram a conversar

it is worth every extra penny = vale cada centavo a mais