Hi there. How have you been? Today we have a new episode of the inglesonline podcast. Please subscribe to this podcast using the Podcasts app for iPhone or iPad, or listen to the episodes using the Inglesonline Android app.

Alright. So if you’ve read the title of this episode, you know that it’s gonna have something to do with laughter and such. And you know that “Ri melhor quem ri por último” is like a proverb, right? In English, it’s not a proverb – well, I’m not gonna talk about a proverb today anyway. What people say in English is something like “I got the last laugh” or “he had the last laugh”. 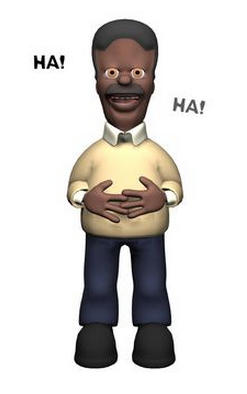 So, what does that mean? Picture this: you’re telling, let’s say… your brother. You’re telling your brother that you’re gonna learn Chinese in six months. Your brother can’t stop laughing when he hears this. It’s been five minutes now and he’s still laughing. “Chinese?”, he says. “There’s no way you’ll be able to speak Chinese in six months. It’s one of the hardest languages in the planet!” He’s still laughing when you reply “Let’s see who gets the last laugh”.

So your brother is literally laughing at you now. And you say “Let’s see who’s gonna have the last laugh”. So let’s say it’s six months later and you have, in fact, learned Chinese. You’re just a genius for languages – you really did learn it. You can hold conversations with native Chinese speakers. So you call your friend Mary and you tell her what happened. You say “My brother couldn’t stop laughing when I told him I wanted to speak Chinese in six months. But I learned it and I can totally understand Chinese people and they understand me as well. So, yeah, I got to have the last laugh”.

Of course, though, there’s no need for the other person to laugh in the beginning in order for you to get the “last laugh”. That is an expression that can simply mean “have victory, be successful” when someone didn’t believe you could do it. Here’s a good example of that: a new movie starring actress… Lucy Smith is out. Yeah, Lucy Smith – she’s a new actress, and many critics have predicted that this movie is gonna be a flop. They’re really unanimous about it. In all the newspapers, the magazines, TV shows, critics are saying that Lucy just isn’t impressive as an actress and that this movie is gonna be a box office failure.

Well, the movie is released and it actually turns out to be a blockbuster. Yep. So today you turn on the TV and you see a TV personality saying “Lucy Smith’s new movie brought millions to the theaters – it looks like Lucy got the last laugh”. So it looks like Lucy came out victorious on this one! Despite all the criticism in the beginning, despite all the negative reviews, success was achieved. The movie had great results at the box office. Nobody believed the movie was good; every single critic in the country gave a negative review… but Lucy’s movie turned out to be a great success. Lucy had the last laugh.

So can you think of an episode in your own life where you could say “I got the last laugh”, or maybe a friend of yours had the last laugh…? Let us know and talk to you next time!