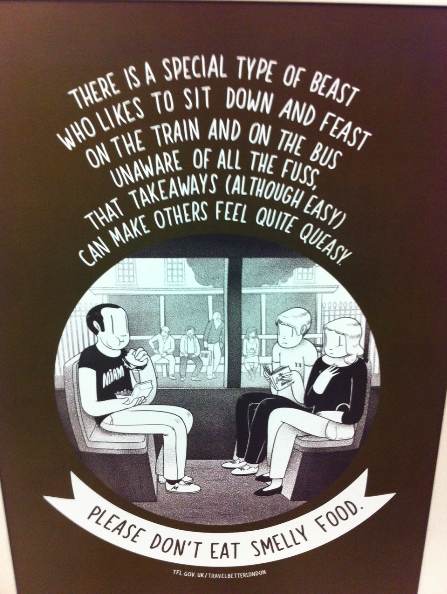 So the other day I was on the tube here in London when I saw this ad, which is an ad put up by the Transport for London department of the British government. I’m gonna read it out for you:

There is a special type of beast
who likes to sit down and feast
on the train and on the bus
unaware of all the fuss,
that takeaways (although easy)
can make others feel quite queasy.
Please don’t eat smelly food.

As you can tell, all the verses rhyme. By the way, I posted the other day about an ad for handyman services that sounded like a poem as well, remember? Very poetic :)

So what’s the one on the tube about? Well – take a look at the glossary for this episode, for word meanings. The general message here is, basically… Don’t eat food that smells when you’re riding the tube. Why would they ask you that? Well, it’s a confined space, sometimes there’s no ventilation and the smell gets really strong, and some people are really bothered by it and sometimes they even feel sick. It’s happened to me on the train – a guy eating french fries (or chips, as they’re called here)… Pretty strong smell.

I mean, to be honest, on a short ride I personally don’t think that’s a huge problem but that’s because I’m quite the foodie and I like watching food shows on TV even when it’s some kind of food that I don’t like… On the other hand, it’s understandable that some people may feel annoyed by it on their journey back home after a long day’s work. It is a pretty small, confined space and it would actually be really nice to wait and eat your smelly food when you get out of the tube.

So I thought it was interesting not only how the government would start a campaign about that, but also that they used verses and rhymes to present it. They’re getting the message across and telling people it’s rude to eat smelly food on the train, but it sounds light-hearted because it’s sort of a humorous poem.

The movie we watched, although long, was very enjoyable. The hotel, although cheap, was very comfortable. Barry, although young, is a very accomplished lawyer. My dog, although small, is very strong.

Care to leave your own example in the comments? I’d like to read it. Talk to you next time.

getting the message across = passando a mensagem

zoom in on (something) = olhar (alguma coisa) mais de perto