Podcast: I’m not underprepared, but I’m running out of time – Inglês Online

Podcast: I’m not underprepared, but I’m running out of time

Hi, everyone! What’s up? It’s December and this is our last podcast of 2010. So I thought… let’s wrap up 2010 with another ‘recap’ podcast. I’ve done this before and lots of people told me they enjoyed it, so today we have another one. So for this episode I put together a little story with expressions that have been talked about in previous English tips or podcasts at Inglês Online.

OK, so first, listen to the story and then, you’ll be able to click… There are some expressions that are hyperlinked and you can click them to find the lesson or the tip about that expression.

So, ready? Here’s the story:

OK, so this little story took place in June of… last year. Let’s say this girl, Holly, had been studying hard for an Italian exam, and let’s say she started studying for this exam in February. It was June now, so she had been studying for four months, right? Well, her exam was an important one because if she passed it, she would be able to work as a teacher at the Italian Language Institute, and that was her dream.

So on the day of the exam she woke up early. She looked at the alarm clock. It was 8am. Holly thought “I’m so ready for this exam”. 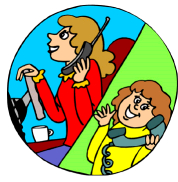 But isn’t it funny how things don’t always work out the way we want them to? Here’s what happened that morning:

It was around 9:30 and Holly was flipping through the pages of her Italian grammar book when the phone rang. She answered the phone with a “Pronto!”

“Hey! Studying Italian?” said the voice at the other end of the line.

Holly recognized the voice. It was her friend Karen.

Karen said “Actually, you told me you had an exam today… Have you been studying much these days?”

And Holly answered “You know me… I wouldn’t go to this thing underprepared.”

But here’s the thing: Karen had just been to their high school reunion, so she was up to date on all the gossip about their old classmates. So Holly and Karen got to talking, and when Holly finally looked at her watch she realized she had 15 minutes to get to the Institute in time for the exam.

Holly rushed out of the house saying “Karen, I’m running out of time. Oh my God, I can’t believe this!” She walked over to the bus stop and saw the bus she was supposed to take… going away.

– Karen, my bus has just left. What am I gonna do?

And Karen said “Hey, relax. I can drive you to the Institute.”

“That’s nice of you to offer” said Holly. “But… you’re too far away, you’ll never be here in time. I think I’m just gonna walk.”

And Karen said “No way! You’re gonna be all sweaty when you get there if you walk! You should call a cab.”

Karen was right. Holly hung up and dialed the number for the only cab company she knew and… Well, to make a long story short, the cab company had gone out of business and Holly missed the exam.  So she had to fork out another two hundred dollars in order to be able to take the exam at a later date.

But hey, at least this time she passed!